Twenty minutes is long for a video.

Especially when that video has to entertain children.

Especially when it’s for a nonprofit organization, who wants to be responsible with their budget.

But that’s exactly what we needed for Dairy MAX, the regional dairy council now representing eight states from Texas up to Montana. Dairy MAX needed a new, 20-minute video to accompany the 30-minute assembly they host for select schools who are part of the nation’s largest youth wellness program, Fuel Up to Play 60 (FUTP 60).

Puppets are fun, versatile and kid-friendly. It’s easier to fit multiple characters into a budget with puppets than with live actors or animation. And, for times when we want to feature real dairy farmers or dietitians who aren’t used to being on camera, puppets can help relax them and bring out their fun side. Not only did we want to use puppets for this video; we saw multiple opportunities to use them in the future.

We initially came up with three puppet characters – students excited about dairy nutrition and Fuel Up to Play 60 – and later added a fourth, adult character to serve as a teacher and coach to the others. We took the character sketches to the immensely talented puppeteer and designer James Kemp, who brought them to life.

Chillin in the green room with my costars for the day. #jameskemppuppets #puppets #play #work #ontheroad #balcom #ftworth #texas #greenroom

“For people who aren’t used to being on camera, puppets can help relax them and bring out their fun side.”

A walking pep talk, Coach Pepper Jack is all about building people up. The FUTP 60 Program Advisor at Havarti High School, he knows all about nutrition and physical activity, and he’s made it his mission to make sure his whole school gets healthy and stays healthy. He hates bullying, negativity and the phrase “I can’t.”

The glue that holds the whole gang together. He’s the idea guy – everyone wants to be a part of his projects. He is great at bringing teams together and getting the best out of people. In his spare time, he plays sports; he’s always on at least one team. Right now, it’s football. Zach hates being alone and hates it when his plans get derailed.

Resident genius. He has a passion for facts and data. He’d be a great teacher – if he could just talk like a normal person. In his spare time, he visits online forums to argue about the scientific theories behind his favorite TV shows. He hates inaccuracy and the outdoors.

A theater kid with tons of energy and a flair for the dramatic. She loves being the center of attention, but she also really cares for and supports her friends. She has no spare time because she’s in drama, band, dance AND the creative writing club. She hates rules and mean people.

We wrote and produced the 20-minute interactive video, partly on set with a green screen and partly on location on a dairy farm.

Nothing can compare with seeing these puppets in person. There is something incredibly lifelike about them that makes it seem natural to talk to them, even when you can see James right there controlling them. It’s easy to see why they produce the reactions they do. 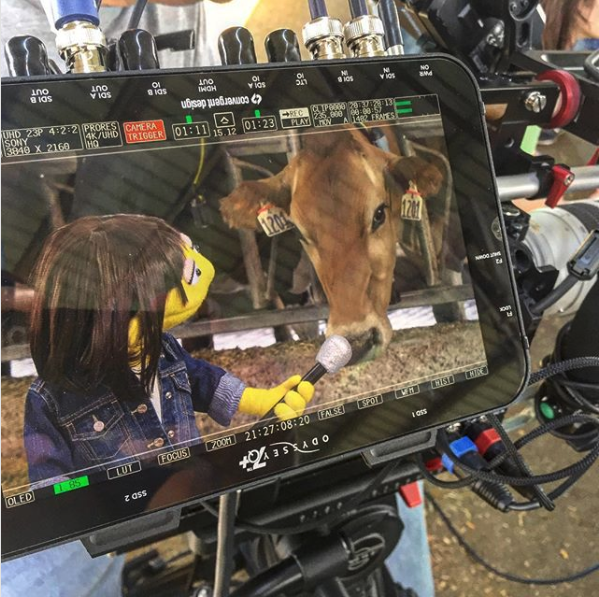 Part of the video included an auto-tune recap of what the kids learned throughout. We partnered with Secret Powers to create the animations and the music.

Sometimes, the biggest challenges inspire the most creative solutions. What’s your challenge? We’re excited to tackle it.