Balcom’s newest art director, Jordan Hough, told us the story of how he met his four-legged friend, and we were so touched we just had to share it.

Did you know Petfinder.com (not a sponsor or client) updates their database every night at midnight? You can just type in your address and it’ll show you all the cute pups up for adoption around you. OK, well, this happened to me around January 2007. I was in college doing what all responsible college students do: pulling an all-nighter studying for a history test. Come midnight, you guessed it, I checked Petfinder.com to see what was on their database. As soon as I hit Search, Lola’s pic popped up at the top of the list. She couldn’t have been more than a month old, because someone’s hand was in the pic holding her up and they were roughly the same size. She was at a Fort Worth shelter 20 minutes from my apartment. They opened at 7; I was there at 6.

When the first employee arrived, I popped out of my car.

“Hi, I’m here to adopt a dog,” I said to the poor lady who didn’t see me coming.

“Oh my, um, I’m sorry hun, adoptions don’t open till 9. You’ll have to come back later,” she said as she finished opening the door.

I sat down, pulled out my history textbook and waited for a couple of hours. Finally, a guy came in to get me.

“Are you here for adoptions? Follow me.” He led me past some double doors to the left and down a hallway to a door that read “Kennel B.” He opened the door and we stepped into an ocean of barking dogs.

“Which one you looking for?” he asked.

“The border collie mix pup that was posted last night,” I replied.

“It’s empty,” I said, worried that someone had somehow beat me to her.

“Nah, she’s there.” He went on to pull out a terrified puppy from the back of the kennel.

She was roughly the size of his hand, the same hand I’ve seen on the picture on Petfinder. He put her down on the floor a few feet from me, where she stood trembling. The poor thing felt like my phone on vibrate mode. I scooped her with my left hand and pulled her toward my chest with my right. That’s when the magic happened. As soon as she felt my heart beat, she stopped shaking and went completely limp on my chest. It was as if she had been waiting for me and now she could finally relax. Oh, this is my dog. 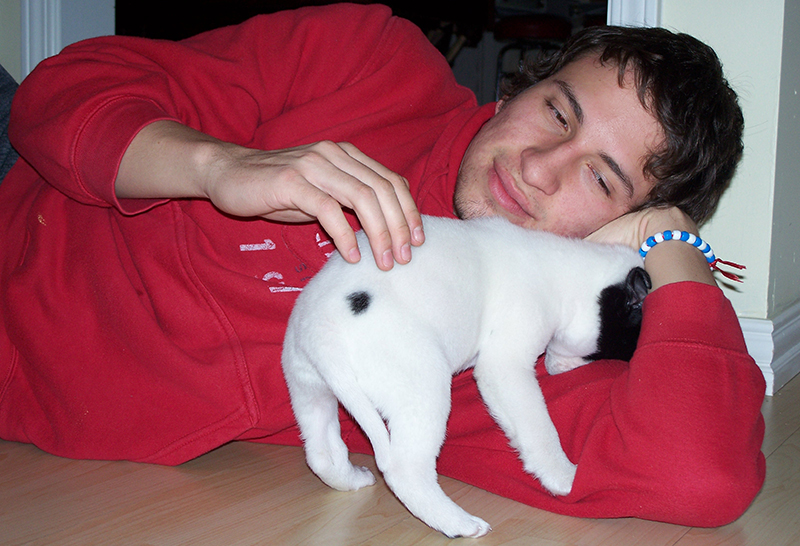 “It was as if she had been waiting for me and now she could finally relax.”

The rest is kind of a blur. I finished the adoption process and signed the papers, all while holding her. It wasn’t until I stepped outside and looked down at my sleeping pup that I realized, I just adopted a dog, and I have a test in 30 minutes. I hopped in my car, drove to the University of Texas at Arlington and went on to fail my test, all while holding sleepy Lola with my left hand. A couple of hours later, I was back in my apartment with this tiny puppy on my lap trying to grasp what I had just done. I was a 20-year-old in college who had just adopted a puppy – a very reckless thing to do, yet one of the best decisions of my life.

She might not fit in my left hand anymore, but she has very much been my traveling companion. I am now 30 years old, and Lola has seen me grow from a college kid to a working adult and even a brand-new father. And yet somehow, throughout all this time, I feel she can still remember that day 10 years ago when we met for the first time.