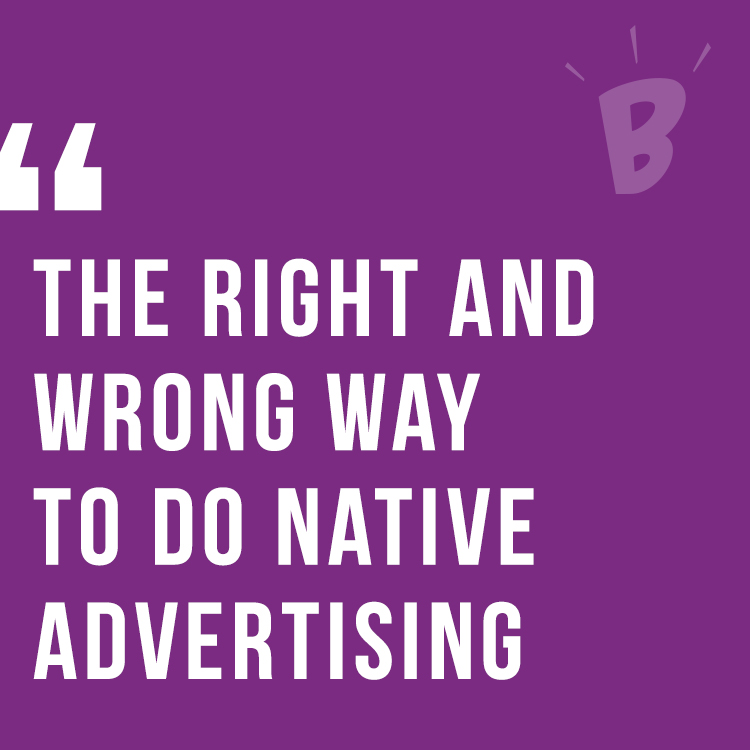 In 2012, many people were proclaiming “native advertising” the buzzword of the year, with all the fly-by-nightness that implies. But signs indicate that content will not only continue to rule, but do so with an iron fist, which means that native advertising is here to stay. And just like any trend, there’s a right way and wrong way to do it.

What is native advertising, anyway?

The term refers to digital ads that blend into a site’s content. You can “place” native advertising on social media (sponsored stories, promoted tweets, featured videos) as well as editorial and news sites (sponsored content, featured partners). Done well, it becomes part of the user’s experience (as opposed to interrupting it) and nets higher engagementrates. Done poorly, it paints brands – and publishers – as disingenuous, out of touch and untrustworthy.

If you’re going to do it, do it right

The goal is to be seamless without trying to disguise the fact that you’re advertising. You should understand the publisher’s content interms of structure, subject matter and tone and make sure your ad is a perfect fit. Take BuzzFeed, for example. The site is famous for its lists, which cover everything from the truly newsworthy (“17 Things Women are Already Doing in the Military”) to the purely entertaining (“25 Things Cats Are Secretly Obsessed With”).

So when a brand wants to advertise on BuzzFeed, it often takes the form of a list, naturally. Like Pillsbury’s “15 Delicious Things You Can Stuff In A Crescent Roll” and Virgin Mobile’s “20 Reasons We Need A ‘Dislike’ Button” – both of which are as relevant to the site’s content as they are to their own brands.

An infamous lesson on how not to do native advertising comes from The Atlantic. The venerable magazine’s online outlet published a sponsored piece on Scientology – and got a face full of backlash. And not just because the “sponsored” nature of the piece wasn’t as obvious as it should have been. It was a bad fit in terms of sponsor and site, and made The Atlantic look like they cared less about their readers than about ad revenue. After the out cry on social media (as well as a mocking Onion article), The Atlantic removed the story and apologized. But the damage was already done.

If you’re ready to go native, you should first get very familiar with content marketing: what it is and how to do it. From there, it’s really all about understanding the publisher’s audience and speaking its language. Because the last thing you want is to look like a tourist.